Low-end severe storm risk in the cards for Thursday 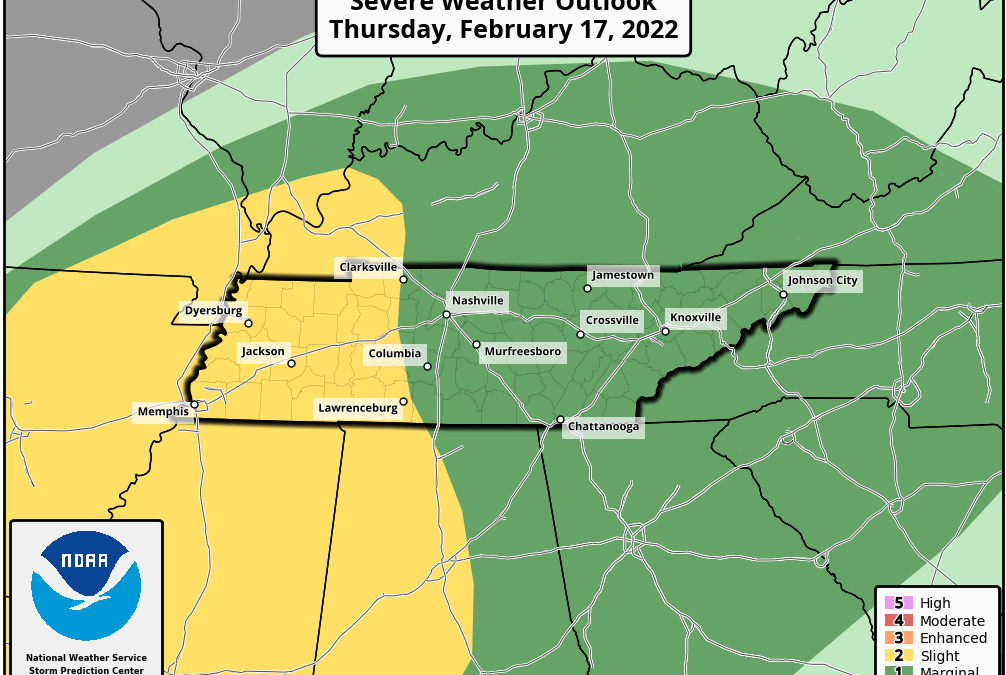 We’ve been blessed to enjoy a relatively quiet weather pattern the past couple weeks featuring the typical ups and downs you expect with temperatures every few days or so this time of year.

The quiet won’t last forever, but you already knew that (or SHOULD know that…).

Our next storm system is set to move through Thursday, forecast to bring us some much-needed rain but at the consequence of at least a low-end probability of seeing a rowdy storm or two.

Before we dig into the where/what/when, today will be quite enjoyable with sunny skies firmly in place and a south-southwesterly breeze helping to kick our afternoon temperatures into the lower 60s in most spots, upper 50s on the Plateau.

Overnight lows will only fall down into the lower 40s with winds becoming a bit more pronounced out of the south — possibly gusting as high as 20 mph at times.

Our Wednesday will be a near copy of today but with temperatures climbing perhaps a couple degrees warmer and with a few additional clouds around. Winds will pick up even more with gusts of 35 mph possible.

Cloud cover will really begin to thicken up Wednesday night ahead of Thursday’s storm system. The continuation of our stiff southerly breeze will only see lows by Thursday morning only fall down into the middle 50s.

Off and on rain showers look to develop as soon as Thursday morning, with isolated to scattered showers possible into the afternoon. This won’t be an all-day rain event, at least as it appears now, but it would be wise to expect rain *at some point* during the day.

Wind shear will be quite impressive for much of the daytime hours, but the fuel needed for storms to fire won’t quite be in place until evening (more on that below). Thus, we’re only expecting plain ol’ rain from morning through early-mid afternoon.

As evening approaches, so will a fairly potent cold front.

Wind shear will further increase as the front moves closer to us, and we *might* see a small window just ahead of the front where instability (storm fuel) increases just enough to support strong to severe storms.

The better instability looks to remain west and southwest of the Upper Cumberland, but there are at least *some* indications that a small amount of instability will creep this way Thursday evening.

It doesn’t take very much instability this time of year to generate severe storms.

For this reason, the Storm Prediction Center has included us in a very broad ‘1 out of 5’ Marginal Risk of severe weather Thursday, primarily for the late afternoon and evening hours as the cold front approaches.

Models are fairly consistent depicting a line of showers and thunderstorms moving through the Upper Cumberland sometime either late Thursday afternoon or during the early-mid evening hours.

Precise timings will be narrowed down as we get closer to the event — we’re still too far out to get deep into timing specifics for any particular community.

The high-sheer, low instability environment would most likely favor a low-end, straight-line damaging wind potential. An isolated tornado could also quickly spin up, but the threat should be quite low with this system. Hail also can’t be ruled out.

Again, it doesn’t take much instability for severe storms to happen this time of year.

If we see even a slight uptick in those parameters we look for (CAPE, dew points, etc.), then our severe weather probability could increase.

Conversely, a lack of instability should see this storm line pass through as mostly just rain with little or no storm worries.

We are very much teetering the line, leaning more towards this event not being too big of a deal for us, but much can change over the next 48 hours, so stay tuned for further updates.

The backside of this system will see a brief return of wintry cold for Friday. No wintry precipitation is expected, at least.

Temperatures will gradually warm back up into the lower 60s by Sunday or Monday. It will be at least the middle of next week before we see our next potential rain maker, the way things look right now.

Hopefully we get through Thursday with few or no worries, but this should serve as a reminder that our severe weather season runs pretty much year-round here in Tennessee, and February is certainly no stranger to stormy weather.

Historically, our severe weather chances begin to increase further as we head into March, with our most active severe weather period coming from March until May, although no particular time of year is immune to severe weather.

Now is a good time to be reviewing your severe weather safety plan — not just for Thursday but for the months ahead as we head closer to spring.