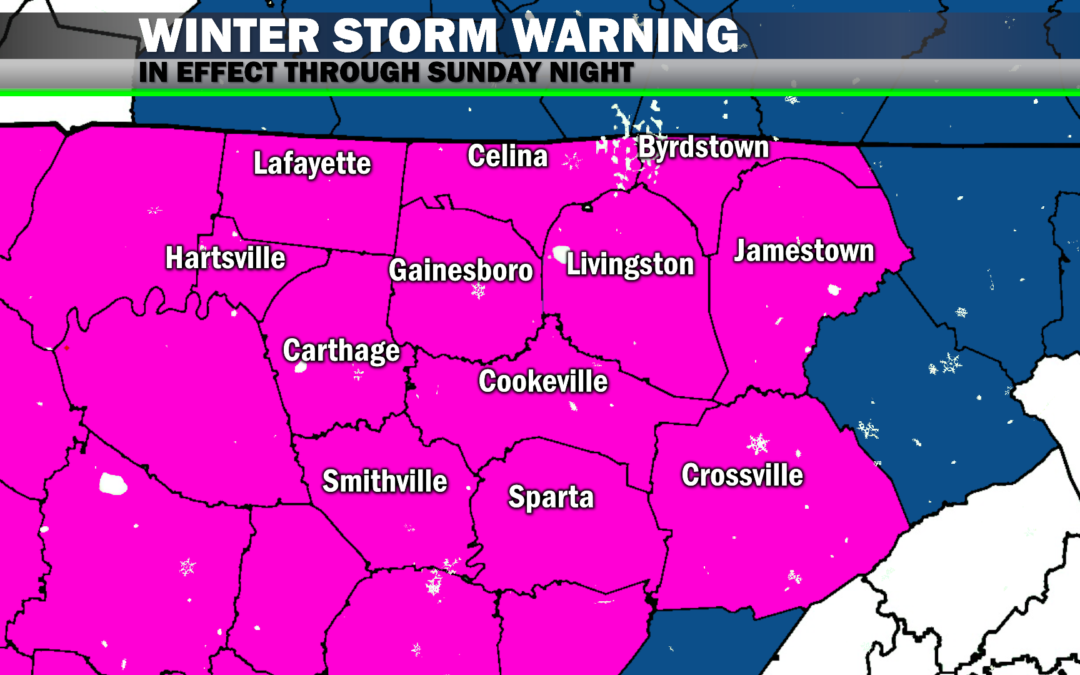 Light rain is scattered throughout the region today. No impacts from this are expected. A transition from rain to 1. a wintry mix of sleet/rain/snow and 2. ultimately all snow will occur between sometime tonight and mid Sunday morning.

Which brings us to our discussion…

We are *finally* seeing agreement among forecast models bringing snow to the Upper Cumberland for much of Sunday, especially from late morning, onward.

Forecasted snow totals haven’t changed much since yesterday, but it does appear a larger portion of the area could see enhanced snow total amounts of 6-7 inches+.

These numbers are still subject to change, and here’s why:

1. Timing. Models still differ on this front as to when we will see the changeover from rain to either a sleet/snow/rain mix and then eventually all snow.

Locations north of I-40 and along the higher elevations of the Plateau will likely see the transition happen first, with snow gradually spreading throughout the southern and western areas thereafter.

So to answer the question of “when will snow begin at (insert location here)?” — I don’t have a direct answer just yet. Snow is a complicated beast to forecast in Middle Tennessee. Temperature profiles have to align just right at all levels of the atmosphere, and that’s the big question right now.

2. Deformation bands. Models have been pretty keen on showing several narrow bands of heavy snow with tremendous snowfall rates of as much as two inches per hour. We will likely see some of these bands Sunday, but we don’t know exactly where they will occur.

Those who find themselves in a deformation band could potentially see their snow totals end up even higher (probably by no more than an inch or two) what is currently forecast.

Conversely, the timing of the snowfall transition and limited/no impact from deformation bands could lead to lesser snowfall totals than what is forecast.

Sunday’s snow will be greatly dependent upon where you are located and sort of be luck of the draw as to how much you receive, but the snow totals forecast map is sort of the ‘best guess’ at it right now based on current model data we have available.

Snowfall should gradually taper off Sunday evening. Significant impacts to travel can be expected into Monday, especially with overnight lows Sunday falling down into the lower 20s. Highs Monday will only top out in the lower to middle 30s with clouds hanging tough, so not much improvement to area roads can be expected, especially in areas where snow ends up being heaviest.

Tuesday should see a decent amount of melting commence with highs forecast to reach the lower to middle 40s in many areas, middle to upper 40s on Wednesday.