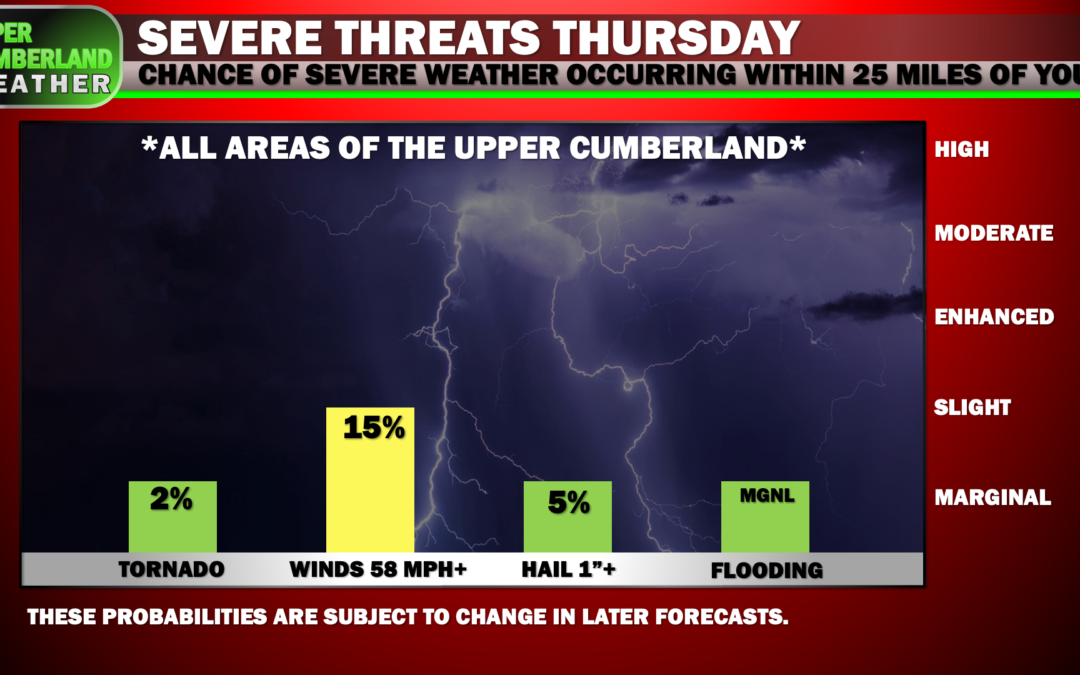 The entire Upper Cumberland region has been upgraded to the ‘Slight Risk’ 2 out of 5 probability designation for severe weather tomorrow (Thursday) in the latest Day 2 outlook from the Storm Prediction Center.

It’s quite mild outside this morning, and we’ll continue to warm well up into the middle to upper 60s in many areas (lower 60s on the Plateau) by this afternoon paired with gusty winds and a bit more cloud cover than we saw yesterday.

This warm air advection is in advance of a strong cold front that will be moving through our neck of the woods late tomorrow (Thursday) evening. Ahead of that frontal passage, we’re expecting scattered showers during the afternoon followed by a line of potentially strong storms during the early to mid evening hours.

We’ll remain dry between now and the late morning-lunchtime period Thursday before scattered showers are expected to break out. Winds already gusting to 25 mph through tonight will pick up further by tomorrow morning.

A Wind Advisory will go into effect at 6 a.m. Thursday morning, expiring at 9 p.m. tomorrow evening. Winds will be sustained out of the south at 15-30 mph with gusts of 45 mph possible. These winds will be out ahead of any rain or storms we see. Go ahead today and secure any loose outdoor objects.

As mentioned, rain showers look to develop by either late morning or lunchtime. Models aren’t in full agreement with the timing of this activity or how widespread it will be, but I would go into tomorrow expecting rain by lunch.

Wind shear and helicity (turning/rotation of winds aloft) will be both quite intense throughout tomorrow. However, instability or ‘CAPE’ (convective available potential energy) will be quite limited, especially at the surface. For this reason, severe weather isn’t expected through at least mid to late afternoon despite showers around.

It does appear we may see a slight uptick in surface-based CAPE, or instability, as the cold front approaches. This could provide just enough energy to feed a line of storms ahead of the frontal passage tomorrow evening and provide us with a risk of severe weather.

It’s important to note just how much of an impact CAPE will have.

If surface-based CAPE outruns the storm complex or doesn’t make it up this way entirely, our severe weather threat will be minimal, at best (wind shear could still provide us with a damaging wind threat, but the threat would be on the low end).

If surface-based CAPE does make it up this way (and it won’t take much at all) and aligns with prime wind shear and helicity as the storm complex moves in, our severe weather chances could increase — particularly the tornado threat.

Our current severe risk accounts for forecast modeling of this event across a wide array of weather models and isn’t the gospel for how this event will play out.

As we like to say, this should be considered a ‘high impact, low probability’ event.

As far as timing is concerned, most model runs are in general agreement that the line will arrive to our northwestern areas (Macon/Trousdale/Smith) *after* 4 p.m., sliding east of our Plateau areas (Cumberland, Fentress) *before* 10 p.m.

This storm line should be fast-moving and won’t take more than a couple hours to move from west to east through the entire Upper Cumberland region, but we’ll leave the general window for storm arrival fairly open-ended until models come into better agreement.

Limited instability, especially at the surface level, should help keep our tornado threat on the low end, but with so much spin in the atmosphere, it won’t take much instability for a tornado to quickly spin up. Right now, we’re looking at a 2% probability of a tornado occurring within 25 miles of any given location in the Upper Cumberland.

Due to the extreme wind shear aloft, we will see an elevated threat of damaging, straight-line wind gusts — the probability of damaging winds in excess of 60 mph occurring is around 15% within a 25 mile radius of any location.

Large hail can’t be ruled out, but the threat is on the low side.

The fast-movement of this line should prevent flash flooding from becoming a widespread issue, but one or two areas could see swift water rises in low lying areas, especially if any particular area is subject to quite a bit of rain during the afternoon hours before evening storm arrival.

Once this storm line passes tomorrow evening, our severe threat will end completely. The good news with this system is we won’t be dealing with an overnight threat. Rather, we’ll see temperatures crash into the upper 20s by Friday morning, but no snow will accompany this steep drop.

Following a couple of cold-ish days (upper 30s/lower 40s Friday, upper 40s/around 50 Saturday), we’ll warm back up to around 60 again by Sunday. Mild temperatures well up in the 60s will carry us into at least the first half of next week with rain chances returning late Monday and into Tuesday.