Winter Weather Advisory in effect for eastern areas of the Upper Cumberland through 3 a.m. Saturday 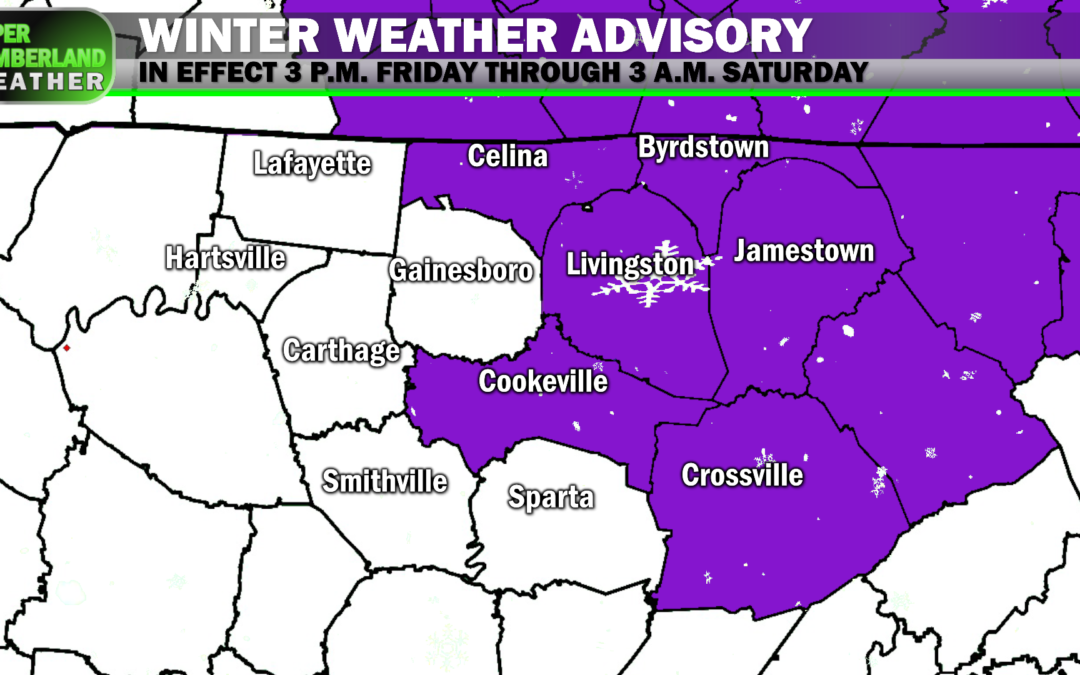 A Winter Weather Advisory was issued late this morning for Clay, Cumberland, Fentress, Overton, Pickett and Putnam Counties — in effect from 3 p.m. this afternoon through 3 a.m. Saturday.

Snow flurries and light snow showers were scattered about for much of the morning, especially across our eastern areas. Little or no accumulation occurred, as expected.

As we head into the afternoon hours, snow showers are expected to become more numerous, especially in the higher elevations of the Plateau. It’s here where forecast models have really started to pick up on the possibility of one, perhaps up to two inches of snow accumulation through tonight.

Those lower in elevation west of the Plateau (Carthage, Gainesboro, Lafayette, Smithville, etc.) could see a dusting, maybe up to a half inch in higher elevations, but significant accumulations aren’t expected here.

Those near but not quite on the Plateau (Cookeville, Celina, Sparta) could see up to an inch of accumulation, but the greater amounts are most probable in higher elevations (Monterey, Crossville, Jamestown, perhaps Livingston).

Snow showers will gradually taper off from west to east around midnight, perhaps lingering into the early morning hours Saturday for the Plateau before ending.

Lows overnight will be downright cold, falling down into the lower teens in many spots. Slippery road conditions can be expected anywhere snow accumulates, especially on secondary roads and along bridges and overpasses.

Sunshine will return Saturday, but temperatures will remain cold. Highs are only expected to top out in the upper 20s to around 30.

A southerly flow will kick back in Sunday, allowing temperatures to climb well into the 40s with sunshine still in place.

We’ll climb into the lower to middle 50s Monday with middle to even upper 50s arriving Tuesday.

The milder temperatures will be accompanied by rain, with wet conditions expected from Tuesday, onward for much of the week. At least this will just be rain and not snow. Temperatures look to remain in the 50s toward the end of next week.