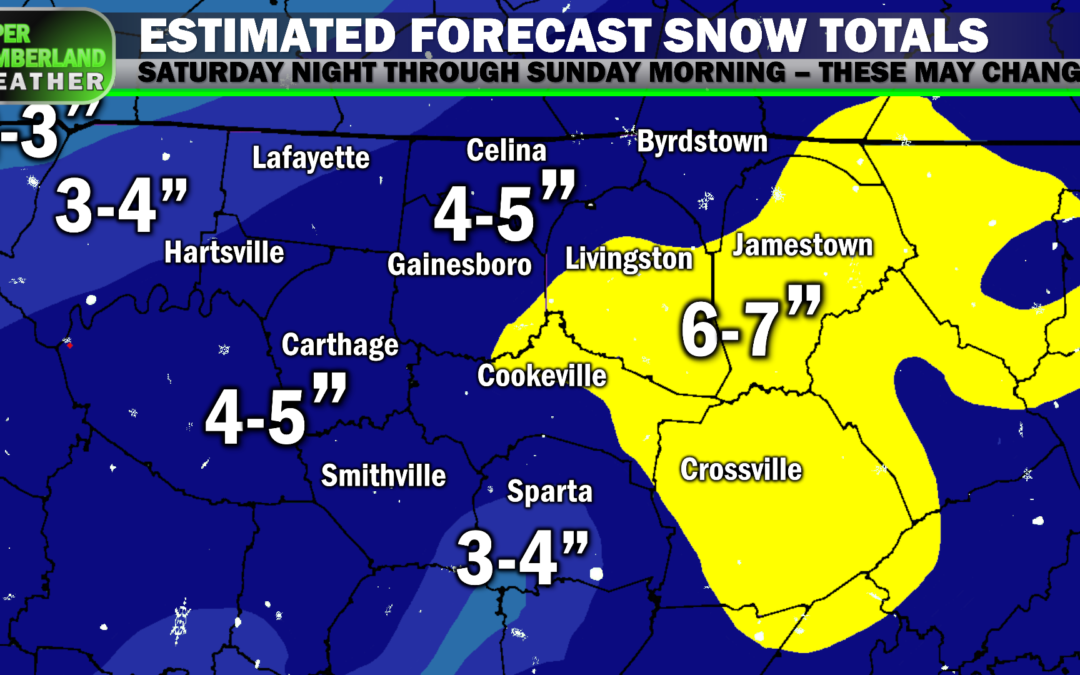 Warning: I go into a greatly detailed discussion below answering every question that can be answered right now. Please note that it is impossible to answer specific questions for specific locations at this point, so all information provided is intended for the entire Upper Cumberland region, not just one town or area.

Short Summary: Off and on rain showers are possible Saturday. This activity could begin with sleet or snow mixed in Saturday morning, but no issues are expected to develop with temperatures climbing into the 40s. We don’t know yet exactly when snow will begin, but our best guess (see the long discussion below for details) is sometime between late Saturday evening and mid Sunday morning. Accumulating snow is likely. The totals posted in the above image *are not* gospel and are very much subject to change. Models disagree on how much snow we will see and when it will begin. Snow will end late Sunday night or early Monday morning.

Now for the long discussion…

I’ve been watching every run of pretty much every model I have direct access to during every 6-to-12 hour run for the past 72 hours — enough to make my eyes bleed (not really), and I still can’t tell you with high certainty *exactly* how the period Saturday evening through Sunday night is going to pan out.

An accumulating snow appears likely for most, if not all of the Upper Cumberland, and that’s about as confident as I can be in the most general fashion possible.

Why is this forecast so complicated?

For starters, the random social media accounts ran by middle schoolers completely jumping the gun Monday posting these outrageous GFS model outputs showing one to two feet of snow incited panic amongst the masses, prompting local media to begin diving into specifics with this then-potential winter weather weather event much sooner than they should have…which then mean*I* have to start talking about it…

Granted, we’re within 36-48 hours of the first flakes or sleet pellets falling, so it’s certainly time to discuss it now. But man alive…

By the way, the GFS (as expected) has completely backed off those crazy high snow totals, at least for any area within 200 miles of us. We’re not seeing a foot of snow with this event…

Further complicating the forecasting process is an unusual level of disagreement between weather models.

It’s quite common for models to vary substantially when we’re 5+ days out from a given storm system, regardless if it’s severe or winter weather.

However, we generally begin seeing fairly good model consensus at this stage, yet we’re still not fully there.

If anything, models have diverged a bit more now that the HRRR short-range model is finally able to pick up on this system (it can only see up to 48 hours out in six-hour model-run intervals; hourly runs only forecast for the next 18 hours).

Where models agree: a low pressure system moving out of the plains will swoop down across areas south of us (placing us on the cooler side for any precipitation…good for snow) and lift back north up the East Coast.

Models agree this storm system will bring widespread precipitation across the southeastern United States both Saturday and Sunday before moving on out.

Models further agree that daytime temperatures Saturday will climb into the 40s, allowing all precipitation that falls during the day to be rain. We could potentially see some sleet or wet snow mix in when precipitation begins Saturday morning, but nothing is expected to accumulate.

Finally, models tend to agree that there will be a changeover from rain to snow that will occur sometime between after sunset Sunday to around sunrise Sunday. Not all models agree here, but most have trended in this direction — at least in previous runs.

Where models disagree: exactly where this low pressure system ultimately lands will make a tremendous difference in how much snow we see and when we can expect snow to begin in general.

In order for snow to happen, all levels of the atmosphere (except for the surface in some circumstances) have to be below freezing. Any variation just a hair above 32 degrees can mean the difference between snow, sleet and freezing rain, depending on what levels those discrepancies occur at and if we are below freezing at the surface.

With this particular system, the track of the low pressure system can mean the difference between a mostly rain and sleet event, a mostly sleet and snow event, or a predominantly all-snow event (once rain changes over late Saturday night).

Cold air is chasing warm air out. It may be a relatively fast process (i.e. snow falling by the time we go to bed Saturday night) or it could be a relatively slow process (full transition to all snow not occurring until around church time Sunday).

This is where models disagree. We even have one notable exception — the HRRR — wanting to keep this system almost entirely south of us with no precipitation at all Sunday.

I don’t buy into this solution. No other models are showing it, and we do have a tremendous amount of consistency between all the other major models showing Middle Tennessee directly in the middle of a long-duration precipitation event this weekend.

We’re also just now seeing the HRRR come into range, so it’s very likely future runs will begin to see it trend more toward precipitation just like its longer-range cousins.

Looking at the latest 18z model runs coming in, we continue to see disagreement. Both the NAM3 and GFS bring precipitation straight across Middle Tennessee and the Upper Cumberland, although they disagree on timing.

The GFS shows scattered rain showers breaking out Saturday morning, continuing off and on throughout the day. A transition from rain to either a rain/sleet or sleet/snow mix begins during the very early morning hours Sunday with snow eventually winning out by mid to late morning. Snow showers would continue into the mid evening hours, gradually tapering off between 6 p.m. and midnight.

The NAM3 shows an isolated shower or two possible Saturday morning but keeps us dry for much of the day. Widespread precipitation then slowly creeps back in during the early morning hours Sunday — first starting out as rain or a rain/sleet mix before sleet/snow and eventually snow wins out sometime between lunchtime and early afternoon (also lessening our potential snow totals significantly).

We don’t yet have 18z ECMWF (EURO) data at this point, but virtually every run through 12z shows this being a fairly significant snow event for the Upper Cumberland with a well-defined deformation band setting up across our region Sunday. The latest 12z run shows a few stray showers around Saturday with widespread precipitation moving in during the evening hours — beginning as rain or sleet and transitioning to a wintry mix late in the night with snow winning out during the early morning hours Sunday, if not sooner.

Finally, we have the 18z HRRR (there are other models, but these are the four primary ones we look at). I don’t know what’s going with the HRRR. As stated, it’s just now getting into range, so I do think its look will change considerably during the 00z and 06z runs coming up. That said, it really seems keen on keeping this system primarily south of us (in other words, this would be a completely ‘bust’).

Are you confused yet?

This is why it’s been very difficult to answer any questions with regards to timing. Granted, we’re still 36-48 hours out, so models ‘should’ come into better agreement soon. I hope.

What do I personally think will happen?

As I mentioned somewhere above, the long-range models have been fairly consistent in projecting a somewhat significant snowfall event across Middle Tennessee and the Upper Cumberland — particularly on Sunday.

While we do have some outliers (HRRR, cough), I don’t think we escape Sunday without accumulating snow. I think NWS Nashville was spot-on getting out ahead of this system with their Winter Storm Watch issuance earlier today, as the potential very much does exist for this to be a significant snow event with major impacts to travel.

This is about all I have to say for this event. Ignore your crap app’s projected temperature readings Saturday night/Sunday morning and all that nonsense. We honestly don’t know enough from what we’ve seen to give you a good outlook there or with when snow can be expected to begin.

Our best forecast is sometime between Saturday evening and Sunday morning. We *should* be in a position to narrow this down much further by tomorrow.

For what it’s worth, here’s the NWS Blend of Models product showing projected snow totals through Monday morning. Don’t take the totals themselves as gospel, but per this guidance, the best models NWS looks at are mostly in favor of this being an accumulating snowfall event for us. That should be out primary takeaway from this graphic:

Last week’s snow event saw snow ratios of around 10:1 or greater. In other words, every 10 inches of snow equated to roughly 1 inch (or less of rain). This is why the snow was more powdery in consistency and not great for making snowmen. It’s also why we really didn’t see any power outages unlike with the preceding event, where the snow was more ‘wet’.

This time around, we’re looking at one of those ‘wet’ snows again with ratios of around 7:1 or 8:1, as currently forecast. Unfortunately, that could mean see yet another scenario where snow piles up on trees and power lines, potentially leading to a few power outage. I *hope* this doesn’t happen, but in your rush to buy milk and bread, you may want to consider what you’ll do in the event your power is out for an extended period.

That’s all I have to say for now. Take this information for whatever it’s worth. Snow will end either late Sunday night or very early Monday morning. Highs Monday may climb just a little bit above freezing, so hopefully any travel problems that do develop won’t linger around long. By Tuesday, we’ll be back well into the 40s, melting most of whatever accumulated away.

The good news is should we see significant snowfall accumulation, you at least shouldn’t be stuck at your house for more than a day or so, if that. The great grocery store rush is entirely unnecessary unless you need an extra couple of meals’ worth of food, but we can thank those ‘doom and gloom’ posts of scary GFS runs earlier in the week for helping incite such unnecessary panic.