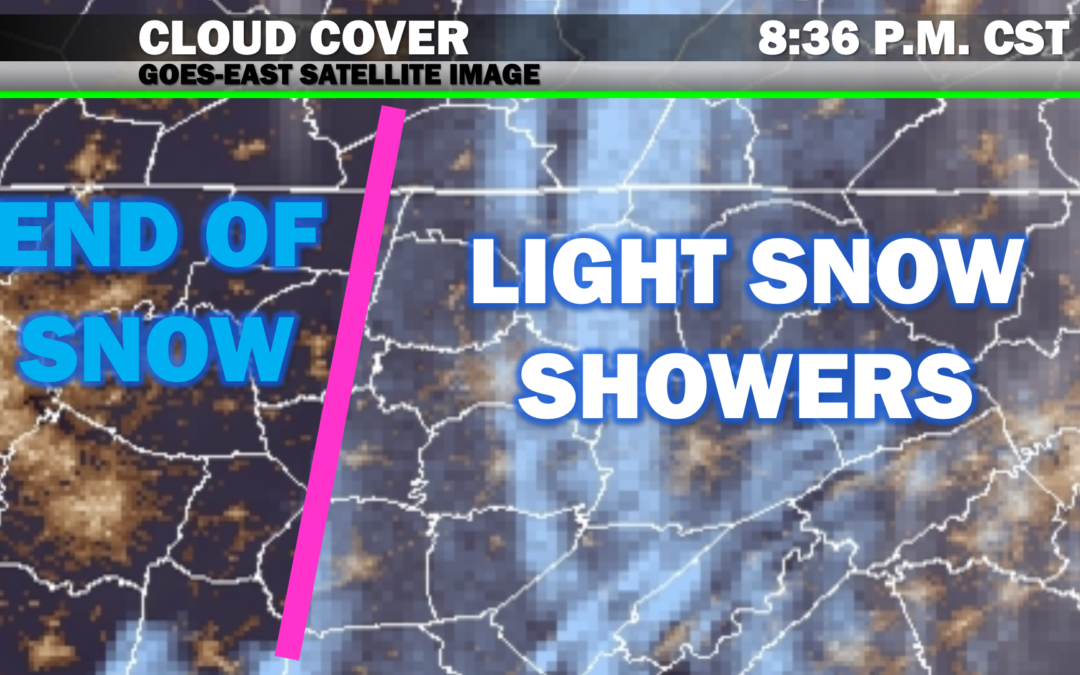 This winter storm is finally winding down, but we aren’t quite done just yet. Another shot of accumulating snow will come during the early-mid morning hours Monday, compounding existing widespread travel issues.

Remaining snow showers are mostly flying under the radar, but we can easily see the clearing line depicted through regional satellite imagery — soon to move through the Cookeville area and eventually across the Plateau over the next couple of hours.

We’ll see a lull in activity for much of the overnight period, but a final impulse with this system looks to bring widespread snow showers back to most of the Upper Cumberland (especially for areas along and north of I-40 and on the Plateau) by sunrise or before.

Some areas could see another half inch to an inch of accumulation on top of what has already fallen. With temperatures in the 20s, this snow will stick to all surfaces, including pavement.Temperatures will continue to drop all the way down into the lower 20s in most spots by mid morning.

Snow showers should end completely by late morning Monday with thick cloud cover persisting for much of the day. The eastern 2/3 of the UC may not see highs rise above freezing while those further west may barely climb to around 34/35.

This system did pretty much as forecast. Did everyone meet their projected snowfall amounts? No. But if you read the fine print and paid close attention to forecast wording the past week, you knew this system was a complicated beast and amounts would likely be all over the place, which is exactly what happened.

The Plateau did well today where some spots (especially in Fentress County) have seen a good 6 inches+.The rest of us saw anywhere from 1-3 inches with locally higher (or lesser…in a few cases) amounts scattered around. I won’t re-hash the conversation of why that is, but it’s not surprising based on the dynamics of this system.

Snow totals should get a slight boost in many areas during the morning hours, perhaps allowing some areas to at least meet the lower end of their projected totals.

As far as travel goes, I don’t have individual road reports for you, but we do have traffic maps based on cellular data. Looking at this view, traffic appears to be slow-moving on most area highways across the region, regardless of where you’re at. This is a pretty good indicator that many of our main highways are slick, at least in spots.

Side streets may be impassable in some areas, especially where snow was able to stick to pavement. Regardless of snow cover, roads were already very wet and didn’t have much an opportunity to dry before temperatures fell below freezing, so widespread black ice is expected through Monday morning.

The bottom line is this: avoid travel unless it’s absolutely necessary overnight. Roads are dangerous, and unfortunately, we may not see much improvement Monday, especially along back roads and some side streets.

There have also been sporadic power outages reported, primarily on the Plateau where our higher snow totals were. Please consult with your local power company for updates in your area should your electricity be out.

A healthy amount of melting should take place Tuesday with temperatures area-wide returning to the 40s with sunshine (hopefully) in place, so most travel issues should become resolved by that afternoon.

Unfortunately, there are signs the remainder of this month will continue to be active in the winter weather department with several *potential* systems on the horizon. That said, the only one we can forecast with any confidence at this stage will come late Wednesday. This event probably won’t be as big of a deal, but we’ll have to wait and see how models handle it the next couple of days.