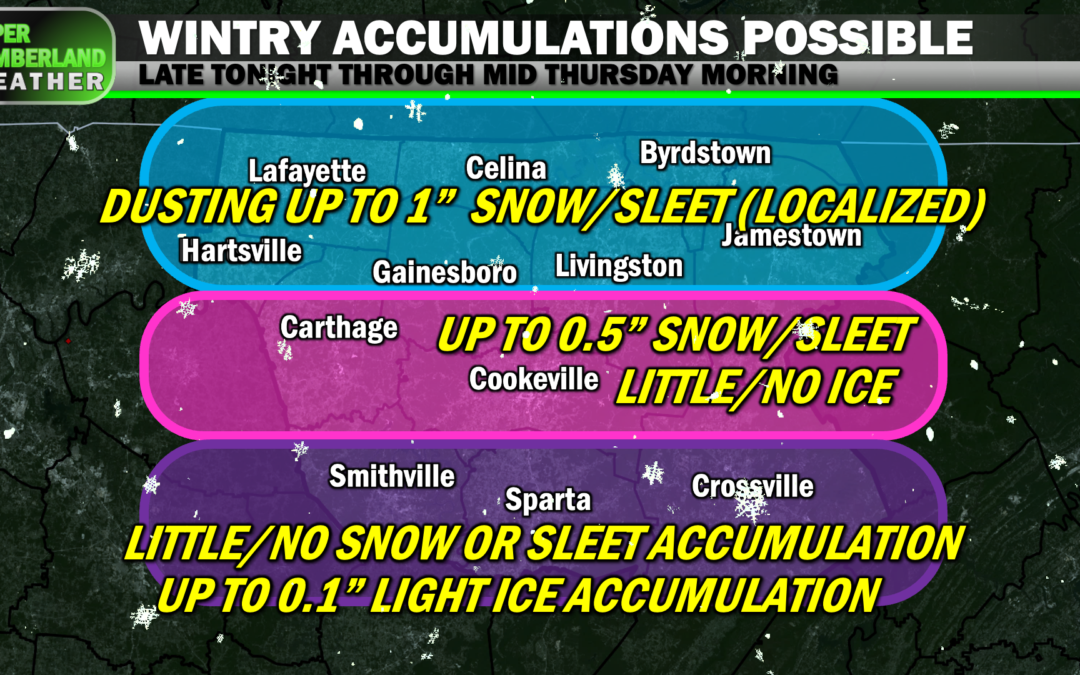 Another round of wintry weather is upon us tonight, although this event doesn’t look to be as significant as the past few snow events we’ve seen, at least on paper. More on that below.

We’ve seen scattered showers break out across the Upper Cumberland this morning. We’ll continue to see rain off and on today, really picking up this afternoon and evening as a strong cold front moves toward the region.

Highs this afternoon will be as mild as we’re going to be at any point in the next week, reaching the upper 40s (Plateau) to lower 50s in most areas.

The combo of snow melt + steady rain showers could lead to minor localized flooding developing in a couple of spots later today, although the flood threat overall is on the low side.

Later tonight, the cold front will move through with ample moisture likely still in place, so a transition from rain to rain/sleet/snow mix and ultimately snow (especially north of I-40) is likely to occur, primarily after midnight in most areas.

The transition will come as temperatures fall to the freezing point (and below) from between around midnight to 4 a.m. from northwest (Lafayette) to southeast (Crossville) — give or take an hour.

The best chance for light snow and sleet accumulations will be north of I-40 and particularly in areas near the Kentucky line. Anywhere from a dusting to upwards of an inch is possible with little or no ice expected.

The farther south you are, the less of a chance there is of seeing snow accumulation but with a slightly increased chance of seeing very minor icing of less than a tenth of an inch — mainly enough to add a thin glaze to area roadways.

We could also see black ice formation area-wide with roads being wet from today’s rains, but we may get some help from gusty winds coming on the backside of the frontal passage to hopefully dry roads a bit.

Any increase or decrease in available moisture behind the front will see our potential accumulations go either or down, respectively.

Should models trend toward higher accumulations, our NWS office has mentioned the possibility of a Winter Weather Advisory being issued.

As of now, no advisories, watches or warnings are in effect for this winter weather event. We’ll let you know on our Facebook and Twitter pages if anything changes.

Lows overnight will bottom out in the middle 20s. Highs won’t recover much tomorrow — remaining at or below freezing in many locations with a few flurries possible, especially during the morning.

Friday will again be chilly but dry for most with temperatures only expected to top out in the upper 20s to lower 30s — this after starting the day in the lower to middle teens.

A few light snow showers can’t be ruled out on the Plateau Friday afternoon, but the chance of this happening appears low. Our next, more widespread shot at precipitation looks to arrive next Monday night or Tuesday.

There had previously been a forecast model or two hinting at a potential winter storm this weekend, but we’ve seen more than enough model guidance the past couple of days to confidently say this won’t be happening.

As far as next week’s system is concerned, we’re still much too far out to get into any sort of specifics.