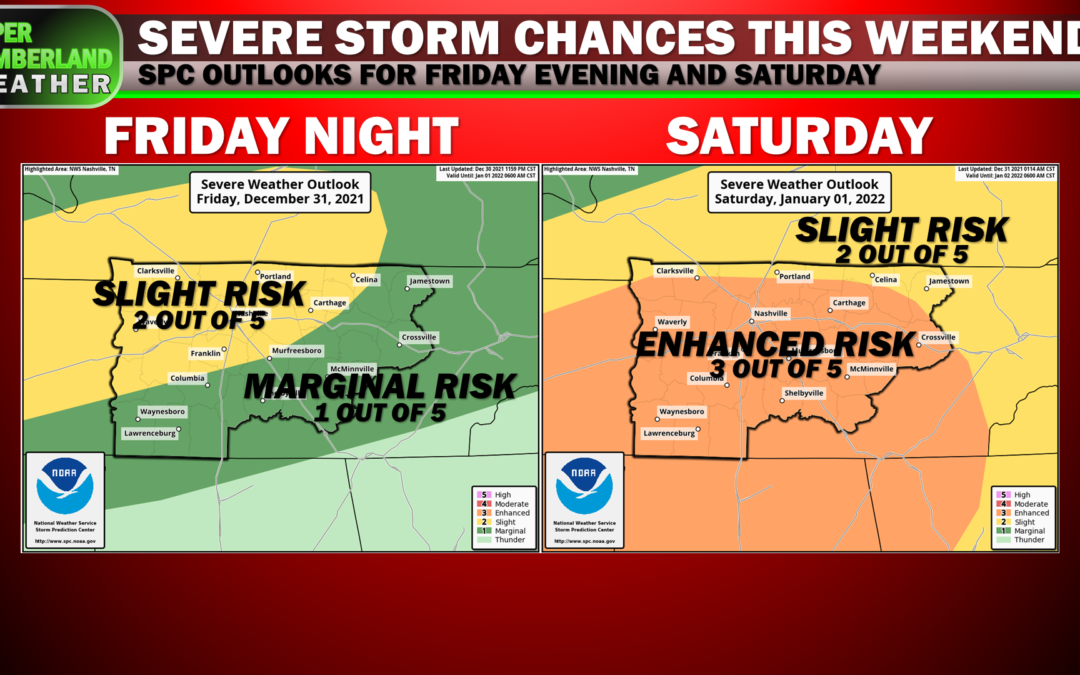 I don’t always make our blog post titles all caps, but I feel it’s necessary as we’re looking at two severe weather threats on a busy holiday weekend when many people will be travelling, whether it be for mini vacations or parties.

I also don’t always stay up way late and post these at 4:30 in the morning, but alas.

This is a weekend you will want to be weather-aware.

We’re beginning this last day of 2021 with a few showers around. Models are hinting at there being enough instability to possibly generate a couple of thunderstorms later this morning, but this activity won’t pose any severe concerns for us outside of a bit of lightning here and there, potentially.

Much of the day will be spent quiet with mainly overcast skies and highs topping out in the upper 60s to near 70.

An area of low pressure will move northeast out of Missouri into Illinois and Indiana, dragging a warm front with it that will move through late Friday.

Along this boundary, we’re anticipating widespread moderate to heavy showers with embedded thunderstorms to develop across our region and gradually lift northward during the early to mid morning hours Saturday.

It remains unclear just how much of our area will see storm activity with this system, as some models have shown activity largely missing us to the north while others blanket our area with shower and storm coverage.

Our current thinking is pretty much everyone will see at least a piece of this activity, but the better storm chances will occur the farther north and west you are in the Upper Cumberland. If you’re farther south or east (calling out Cumberland County here because they’re out farthest-most southeast point), then you’re looking at a slightly lesser chance of showers and storms.

As such, the threat of any severe weather occurring will be greatest in our northern and western areas, as well. This is where the Storm Prediction Center has included part of our region in a Slight Risk for severe storms that extends northward into western Kentucky, well back to the west into most of Arkansas.

At this time, we’re not expecting widespread severe weather, as instability doesn’t look to be elevated enough for updrafts to really get their act together. That said, a couple storms could contain damaging wind gusts or large hail. An isolated tornado also can’t be ruled out, but we’re not looking at a significant tornado potential by any means.

Heavy rain will be another concern and one that we will have to watch closely. We could see some localized flooding issues develop, particularly in low-lying areas either with poor drainage or along creeks and streams, especially if we see rain train over the same areas for an extended period.

As far as timing goes, we’re expecting storms to develop potentially a few hours before the clock strikes midnight with scattered storm activity continuing into the early morning hours of Saturday before gradually lifting north and completely out of our region by mid morning.

I wish at this point I could say we’ll be done and can go about our New Year’s Day in peace, but unfortunately, 2022 is starting out on a rambunctious note, as yet another, more significant threat of severe weather will present itself late in the day Saturday and into the evening hours.

A surface low will set up well to our north, dragging a cold front across the Mid-South during the Saturday. A QLCS ‘squall line’ looks to form to our west, moving into Tennessee during the late afternoon hours and arriving to the Upper Cumberland around or after sunset.

Much of the daytime period Saturday is looking dry. Clouds will hang around, but it’s possible we could see a few rays of sunshine try to peak through, which won’t help our storm chances any.

The Storm Prediction Center has blanketed virtually our entire region in an ‘Enhanced Risk’ of seeing severe weather Saturday. Severe storm probabilities are broken down below:

Of particular note is the 10% probability of seeing violent, long-track tornadoes EF-2 or stronger.

Ahead of the squall line, many of the ingredients needed for big-time severe weather look to be in place. The question will be whether or not we see any supercells develop out ahead of the main line.

Models are currently in disagreement over the supercell threat. Some have shown cells developing while others only have the main squall line impacting us.

Should we see supercells develop during the afternoon Saturday, these will pose a much greater threat of severe weather, primarily in the form of strong, long-track tornadoes.

The good news right now is that threat doesn’t look to be particularly high, but it is definitely something we’ll be on the lookout for, and you’ll definitely want to pay close attention to what’s going on and stay weather-aware until the threat passes late Saturday night.

The squall line itself does appear quite likely at this point and will impact all areas of our region from about 4-9 p.m. CST from west to east (we’ll be able to narrow that window down further as we get closer to the event).

Large hail and damaging, straight-line winds will be our primary concerns along the squall line with a few isolated, embedded tornadoes possible.

The tornadoes associated with squall lines are fairly common for us (especially this year, it’s seemed), and they are generally weak and short-lived.

With the environment we’ll be in late Saturday, it’s not impossible we could get some embedded supercells within the squall line capable of producing a strong, long-track tornado, but it’s not a threat we’re overly concerned with at this time.

Our main worry with tornadoes of that nature would be with any supercells should they develop out ahead of the main line during the late afternoon/early evening hours.

Our severe weather worries will come to an end late Saturday night, so we fortunately won’t have to deal with an overnight threat while most of us sleep.

That said, rain will continue for a long while behind the squall line, so flooding issues are possible to develop.

NOW IS THE TIME TO REVIEW YOUR SEVERE WEATHER SAFETY PLAN.

Know where you will go in the event a warning is issued tonight or Saturday.

If you live in a mobile home, make arrangements to stay with a friend or family member with sturdier shelter, especially Saturday evening until the threat passes.

Your tornado safe spot should have a few essentials on standby: first aid kit, flashlight, shoes, helmets (blunt-force head trauma kills many people tornadoes; a helmet can very well save your life), maybe a whistle or air horn.

That NOAA weather radio you own should have fresh batteries in the event of a power failure. You should also have an alerts app installed on your smartphone as a backup, such as StormShield (free) or StormWatch+ (very inexpensive…like one dollar cheap).

Your phone should be fully charged both tonight and all day tomorrow. Your ringer should be turned on with ‘do not disturb’ disabled.

As always, we’ll be right here providing live coverage for any warnings issued across our social media pages and on our 24/7 live channel.

Temperatures will gradually fall into the 40s by Sunday morning, falling down into the 30s by afternoon. Moisture will be slow to move out with this system, so we are expecting a transition to snow showers during the late afternoon hours Sunday.

Because the ground is so warm from mild temperatures we’ve experienced as of late, and with temperatures taking their time to fall below freezing late Sunday, we’re not anticipating much, if any accumulation with this system.

Wilder things have happened, so we won’t call it a zero-chance. But if I were a betting man, I would say only the Plateau has a reasonable chance of seeing a dusting or so. We’ll have to wait and see though, and the severe weather threat certainly takes priority over what will likely be a very low-end snow event for us.