“Remember this name – Anthony Taylor – a weather person of the future.”

I watched Lelan’s forecasts just about every morning before school.  My mother is a teacher, and she kept the television turned to channel 5 every morning as we got ready to leave.  We would leave the house around 7:15, just after Lelan would give the forecast.

Weather was a big deal to me as a kid.  I loved to draw, and my pictures would often depict tornadoes or some other form of weather.  Any time my family went somewhere and I happened to spot one, I would ask daddy for 50 cents to get a copy of The Tennessean out of those orange machines they used to have everywhere (do those machines even still exist?) — I didn’t want it for the news but to look at the full-color, half page weather forecast at the end of Section B.  I don’t know why I was so fascinated with it, but I always wanted a copy whenever I could get one.  For the longest time, I kept a copy from July 2002 with a front page photo of the BellSouth tower (Batman building) in Nashville being struck by lightning.

Weekends were special.  My parents would let me sleep in the living room on Friday and Saturday nights, and I could stay up as late as I wanted to.  During the summer, this was an every-night arrangement.  As long as I kept the volume down and didn’t watch anything I wasn’t supposed to, they didn’t mind.  It’s not that my own bedroom wasn’t cool, but we only had satellite in the living room and their bedroom.  My room had a little 13 inch TV with rabbit ears.

I kept the TV on those nights, but what did I watch mostly? 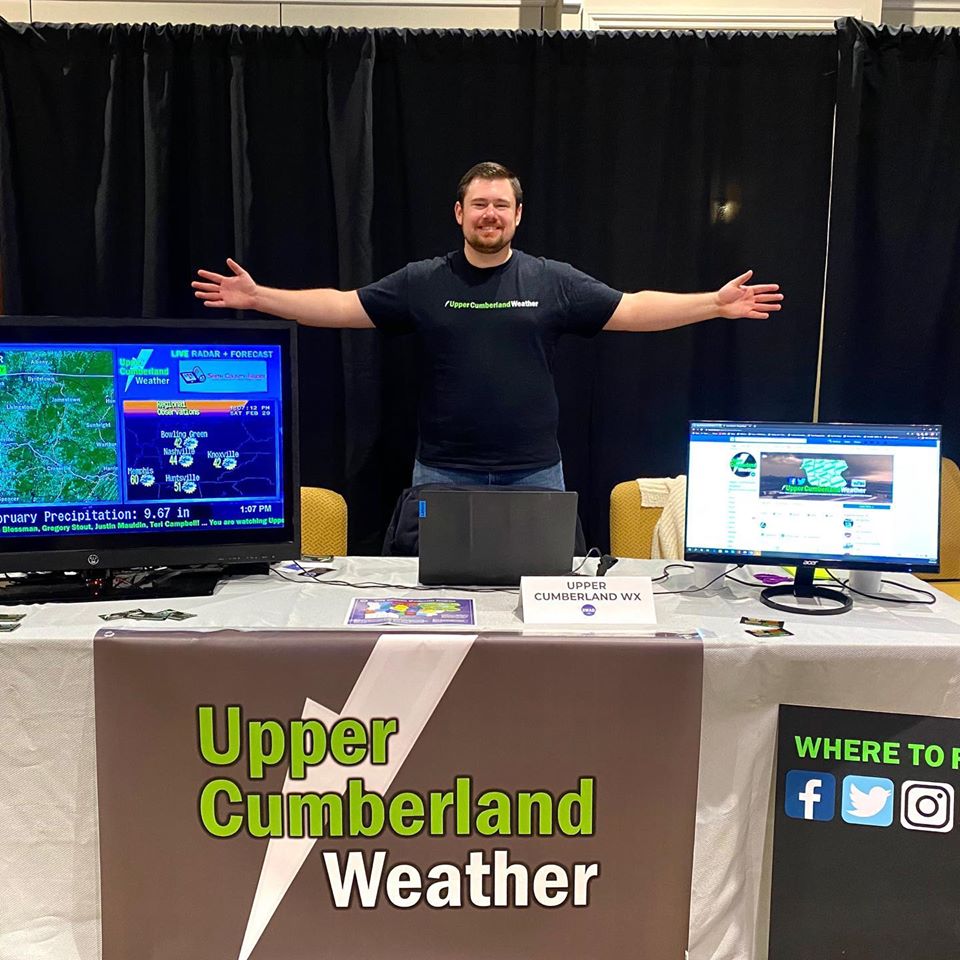 I did watch a fair amount of Nick @ Nite and understand many more references to old TV shows as a result than most others my age.  However, The Weather Channel was generally appointment television.

This was back in the days when The Weather Channel rarely aired scripted programming outside of a couple of shows.  It was 24/7 live weather forecasts with Local on the 8s actually at the :08 mark every 10 minutes — sometimes playing for up to two minutes!

Oh, and going on vacation was a big deal — not just for the vacation part, but it meant getting the cable version of Local on the 8s with an actual local forecast (not the national feed on boring DIRECTV) narrated by the great Allen Jackson (the voice actor, not to be confused with County Music Hall of Fame-r Alan Jackson).

Probably the pinnacle vacation moment came on a trip to Destin in July 2001.  We were visiting the Gulfarium at Fort Walton Beach and had just finished watching the sea lion performance.  There was some commotion going on behind the building at the beach, so we went to check it out.  Daddy pulled out the camcorder and started filming the waterspout churning probably a mile or less away in front of us.  I was both super excited and terrified.  Mama snapped a photo of me ‘cheesing’ in front of the thing, and then we darted for the gift shop.  We later found out that while watching a local TV station that night that the waterspout actually came onto land while we were in the gift shop as a tornado and did a little damage.

That was comforting to hear…

Anyway, I loved weather.  I loved everything about it.  Tornadoes fascinated me.  They were scary as heck, but I loved watching them on TV or reading books about them!

One May morning in 2002, Lelan Statom came to speak to us at school.  I was in second grade at the time in Mrs. Jill Wilmore’s classroom — my favorite teacher in all of grade school.  Mama taught kindergarten a long hall away at the back of the building and helped make a cool moment happen for me (having a parent as a teacher has its privileges, not gonna lie).  Watching Lelan speak was cool — I can’t tell you now what he spoke about, but I was star-struck to say the least.  After he wrapped up his talk, mama walked me over to him to introduce me.  I had drawn two pictures for him to show on air (Lelan used to feature a ‘Kids Weather Art’ segment just about every morning before his forecasts), and mama wanted me to give them to him personally.  I had drawn him both a picture of the 1998 Nashville tornado (my eight-year-old depiction) hitting Nashville, as well as a picture of radar showing storms hitting Kentucky and Tennessee on NewsChannel 5 — a true weather nerd thing to draw, the more I think about it.

I handed Lelan my drawings and shook his finger (he had a LOT of other drawings in his hand — getting your artwork shown on TV was kind of a big deal then).  My eight-year-old self was over the moon.

The next morning, I was glued to Channel 5.  I probably woke up an hour early just to watch as much as I could to see if he would show my drawings.  Mama even put a tape in the VCR to record the newscast in case we missed it.  Well, 7:15 is only a few minutes away, and we need to leave.  Lelan comes on one last time, and, well, I’ll let you see it yourself:

Fast forward a decade to 2012.  I graduate from Smith County High School ranked 11th in my class with plans to go to Middle Tennessee State University in the fall.  I was still a bit undecided what pathway I would embark upon there, but I did know the ultimate goal was to become a meteorologist, either for the National Weather Service or on television.  That September, I decided to start a Facebook and Twitter page centered around weather in my community.  The idea came to me after receiving quite a bit of positive reaction from friends and family each time I would post storm updates to my personal social media accounts.  Rather than continue to post updates that way, I felt they might should exist in their own place and be accessible to more than just those who I was ‘friends’ with on Facebook.

Thus, Smith County Weather was born the morning of Sunday, September 2, 2012, at the Gordonsville Waffle House.

I had no idea what would come of it, and I truly had no official plans for it other than to post occassional severe weather updates.  I didn’t even think that many people would follow it.

But oh was I wrong.

,Not even 48 hours after launch, the Facebook page had accumulated its first 100 ‘page likes’ or followers (now page likes and followers are two different numbers, and it’s super confusing).  11 months later at the end of July 2013, the page hit 1,000 likes.

I made a commitment that first year to always be active during severe weather and never miss a storm.  This was a bit of a challenge with college being a thing and working primarily off of an iPhone 3GS (Kennys Bend didn’t — and still doesn’t — have high speed internet access, but AT&T 3G cellular service somehow picked up).  To this day, I don’t know how I did it, but I did.  It helped that Facebook’s algorithm wasn’t quite as dumb as it is now and posts mostly showed up on people’s news feeds in real time, but most severe weather updates were literally just screenshots of radar accompanied by a caption of what was going on.

I thought this was high tech back then.

The formula remained pretty much the same those first couple of years.  I would post a forecast update once or twice a day and provide continuous updates throughout severe weather events.  I always made sure to be available during severe weather, and even to this day, I can only count on one hand the number of warnings I’ve missed in almost eight years.

Speaking of warnings, I only stuck to National Weather Service products and forecast guidance — never over-hyping storms for attention or issuing my own warnings.  Doing so would have been completely irresponsible and detriment to my mission.  Likes and shares were certainly important, but only for the purpose of spreading word of impending severe weather.  We could still have only 1,000 Facebook followers to this day, and my motivation wouldn’t be any different than it is now at over 16,000 followers (plus 2,000+ on Twitter).

Fast forward a bit more to 2015, and Smith County Weather had come along nicely.  It was well-established as a credible, reliable source for severe and winter weather updates, and folks would often comment about how they would come to Smith County Weather first before seeking out some other form of weather information, which was humbling.

David Drobny, originator of the Nashville Severe Weather (NashSevereWx) Twitter account, approached me in early 2015 about joining the #tSpotter community — a group of (then) eight or so other pages on Twitter essentially doing the same thing I was doing in Smith County.  #tSpotter is officially recognized by the National Weather Service office in Nashville, and joining the group made complete sense.  If ever there was a need to provide an extra level of legitimacy to Smith County Weather and its place as an official source for real-time updates during severe and winter weather, receiving that designation from NWS Nashville solidified my place.

With #tSpotter came access to NWS Chat — a government-based messaging system reserved for direct communication between the National Weather Service and both emergency management personnel and certain members of the media — particularly meteorologists  I use this service frequently during severe weather to communicate with NWS Nashville and forward storm reports to them that you fine folks submit to me!  In fact, the #tSpotter hashtag exists on Twitter as a means to provide storm reports, which, in turn, NWS Nashville keeps track of during severe storm events.

Later in 2015, I experimented by adding a second page to the fold — Trousdale Severe Weather.  At the time, each county surrounding Trousdale Co. was covered by a #tSpotter Twitter page, but not Trousdale itself.  Since most storms impacting Smith County roll through Trousdale County first and I’m already watching them (and, as I would often joke, I could literally see Trousdale County from my home), covering that county shouldn’t be too cumbersome, at least in theory.  What I didn’t know at the time is this experiment would pave the way for adding a whole bunch more counties to the mix less that two years later!

*editor’s note: this ‘About’ section is in the process of being updated*