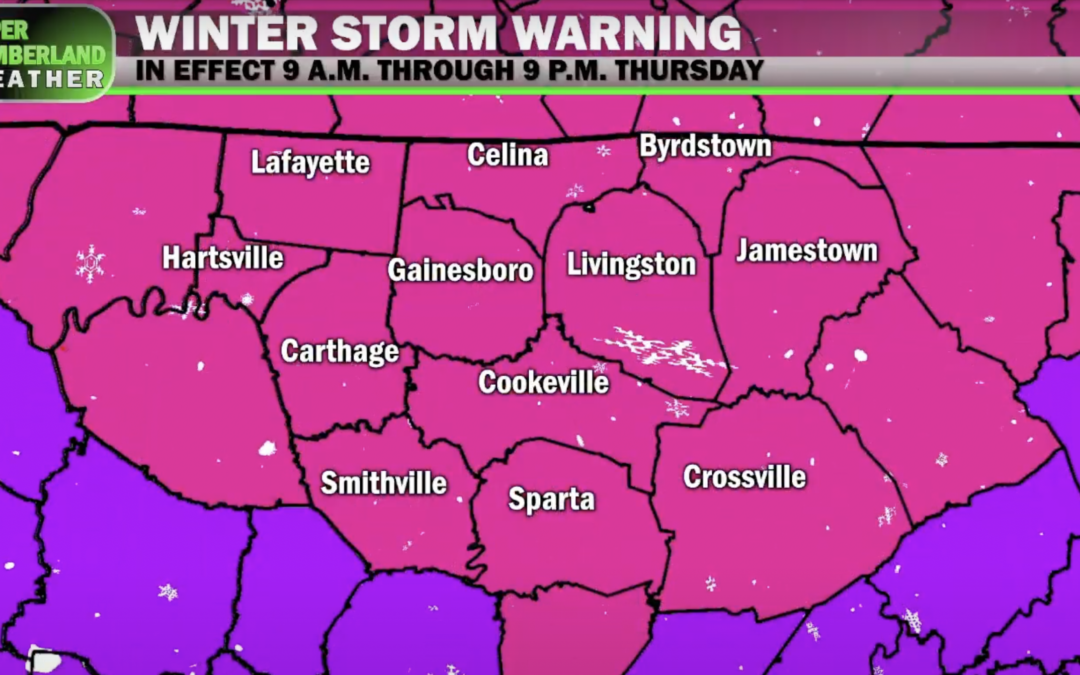 Our Thursday is shaping up to be quite a doozy thanks to a winter storm that will be impacting the entire Upper Cumberland region and Middle Tennessee at large.

The Winter Weather Advisory issued earlier today has been replaced with a Winter Storm Warning as forecast models have been favoring higher potential snow totals for our Thursday in recent runs. This warning goes into effect at 9 a.m. CST Thursday, expiring at 9 p.m. and includes all 12 of our coverage counties (Clay, Cumberland, DeKalb, Fentress, Jackson, Macon, Overton, Pickett, Putnam, Smith, Trousdale and White).

Typically, our snow events are dependent upon cold air wrapping around the backside of a given storm system while sufficient moisture is still in place in order for snow to fall.

This event is completely different from that scenario. The cold air is already in place thanks to a cold front that’s moved through. That front will stall out down to our south with a low pressure system riding up the front during the daytime hours tomorrow.

Temperatures overnight will fall down into the middle to upper 20s in most spots, allowing all surfaces to be at the freezing point when snow begins in the morning.

With temperatures expected to remain below freezing in most areas throughout the day, this looks to be an ‘all-snow’ event for us.

It’s likely we’ll see several heavy bands of snow at times capable of putting down an impressive rate of snow in a short period.

In all, it looks like most areas will see *at least* three inches, at minimum. Some sporadic two inch amounts can’t be ruled out, but it’s more likely most of us we’ll see much more than that. Some models have projected amounts as high as 6-7 inches, even in lower elevations! The official forecast isn’t quite that aggressive, but it truly wouldn’t be a surprise if some areas did receive that much snow, the way things are setting up.

Here are some model examples of total accumulations below:

As for the forecast, NWS Nashville thinks 3-4 inches will be common across the Upper Cumberland with pockets of higher amounts likely, especially in higher elevations.

Road conditions will very likely deteriorate quickly, especially those that are untreated as pavement will already be freezing at the onset of snow.

I won’t speculate as to how treated primary roads will do. TDOT has been hard at work in preparation for this event, and it helps that we won’t see any rain to wash the brine away.

It stands to reason main roads may fair OK for at least a little while, but with some of the snowfall rates we’re expecting, it wouldn’t surprise me at all if roads are overcome at some point during the day.

Bridges and overpasses will also become treacherous, as well.

Travel in general tomorrow is discouraged, especially from late morning, onward. If you must get out for non-essential errands, do so early in the morning before the snow arrives.

Those who must drive out in these conditions should exercise extreme caution. Unfortunately, we’re expecting the coldest temperatures we’ve seen so far this season Thursday night into Friday morning with lows in some spots dropping all the way down into the upper single digits, so a hard freeze of area roadways can be expected where snow/slush is present.

Not much melting is expected Friday, either, even with some sunshine reappearing. Highs will be held down into the 20s, so while the sun’s radiation may help a tiny bit with main highways, backroads likely won’t see any improvement.

It won’t be until Saturday that we see temperatures climb back well above freezing, allowing a good amount of melting to take place.

Please be careful Thursday and stay home, if possible. We all know far too well how driving conditions can be in these type winter storm events.