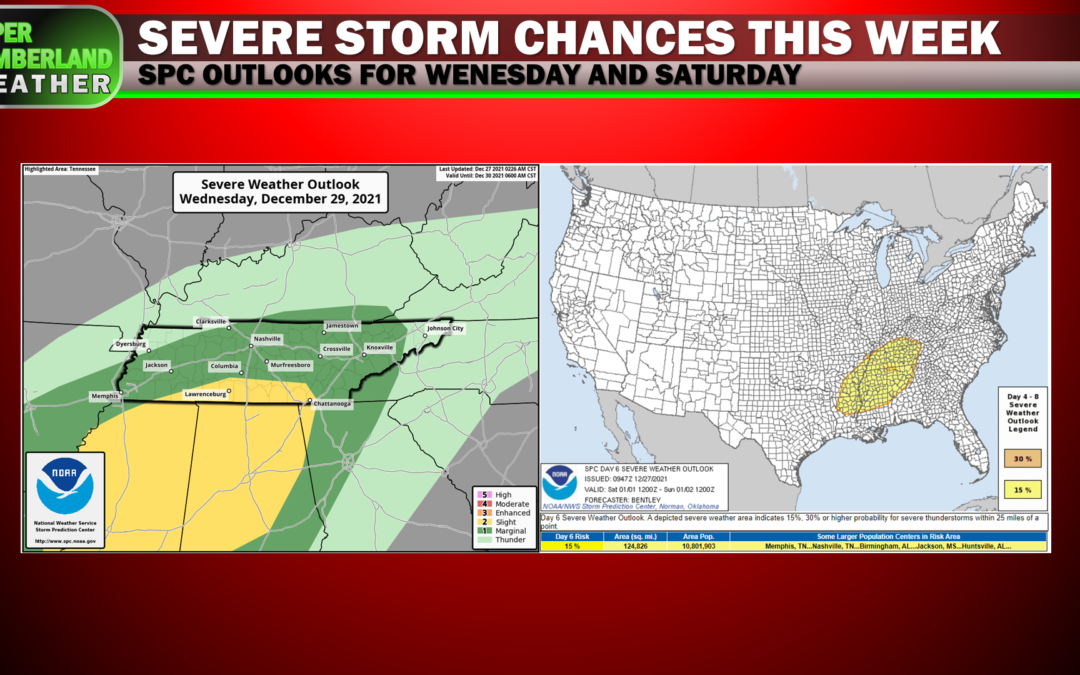 How phenomenal was our Christmas weekend? I mean that really was something! Yes, not everyone likes Florida weather on Christmas, but it’s not very often at all we see temperatures quite as warm as what we saw over the weekend this time of year without any rain or storm concerns.

Much milder-than-average temperatures will continue through this week and into the weekend, but unfortunately, it may come at the cost of strong to severe storms — particularly this weekend before we usher winter back into Tennessee.

Before we get into the meat and potatoes of what to expect later in the week, let’s talk about today. Most of us will be dry heading into this afternoon, but scattered light showers and sprinkles look to break out across the region during the evening and nighttime hours. No issues are expected with these.

Highs this afternoon will again be in the middle to upper 60s for most. That southerly breeze we’ve become accustomed to will continue with winds sustained at about 10-15 mph and higher gusts possible.

Lows overnight will only fall down into the upper 50s to around 60° with a few showers scattered around.

Off and on scattered light showers will continue into Tuesday with highs a bit warmer in the lower 70s for most, upper 60s on the Plateau. Clouds will be persistent, so don’t expect much, if any sunshine to peak through.

We’ll see an uptick in instability Wednesday as a warm front lifts through the area followed by a weak cold front sometime during the nighttime hours.

Scattered showers and thunderstorms appear likely throughout the day and into the evening Wednesday. We don’t yet have a firm start/stop time, but it would be wise to expect thundershowers at pretty much any point during the day and evening/nighttime period.

The Storm Prediction Center has introduced a Marginal severe weather risk to our entire region in their Day 3 convective outlook for Wednesday.

The parameters needed for severe weather don’t look to align all that well, but there might be just enough instability that a strong storm or two can’t be ruled out, particularly Wednesday evening as the cold front approaches.

We’ll have a better idea by tomorrow of how this storm threat will evolve, so stay tuned for further updates. As of right now, it’s more on the ‘meh’ side of things, especially when compared to the system we’re looking at this weekend.

Skipping ahead through Thursday and Friday (New Year’s Eve) as there isn’t anything too particularly noteworthy to discuss (mild temperatures continuing / low chance of rain showers), let’s take a look at New Year’s Day (Saturday), as the much-warmer-than-average temperature show will be coming to an abrupt end thanks to a potent weather system that will be taking shape at the end of this week.

Right now, it appears a warm front will lift north through the area, potentially triggering widespread showers and a few thunderstorms as we ring in 2022 Friday night through Saturday morning.

This front will be associated with a low pressure system tracking to our north and may allow a much more unstable environment to take hold over our region for Saturday (New Year’s Day).

A cold front will then push through sometime between Saturday evening and early Sunday morning, although exact timing details are still to be ironed out.

It’s during the window from Saturday afternoon through early Sunday morning that we’ll be watching model trends for to see how a potential severe weather threat will evolve.

As it stands, the Storm Prediction Center has blanketed all of Middle Tennessee, including the Upper Cumberland, in a Day 6 ‘15%’ severe weather probability for Saturday, as our area currently looks to be in a favorable corridor for potential severe weather development.

Much can and will change with the forecast between now and Saturday, so stay tuned for further updates as we get closer to this event.

For now, it’s much too early to get into specifics, as forecast models are most certainly not in full agreement for how this event will unfold. We’ll have a better idea for timing and potential severe weather modes as we go through the week.

Much colder air will return Sunday on the backside of this system, and it’s not out to the question we could see a little bit of the white stuff before all is said and done, but it’s way too early to make any predictions on that…