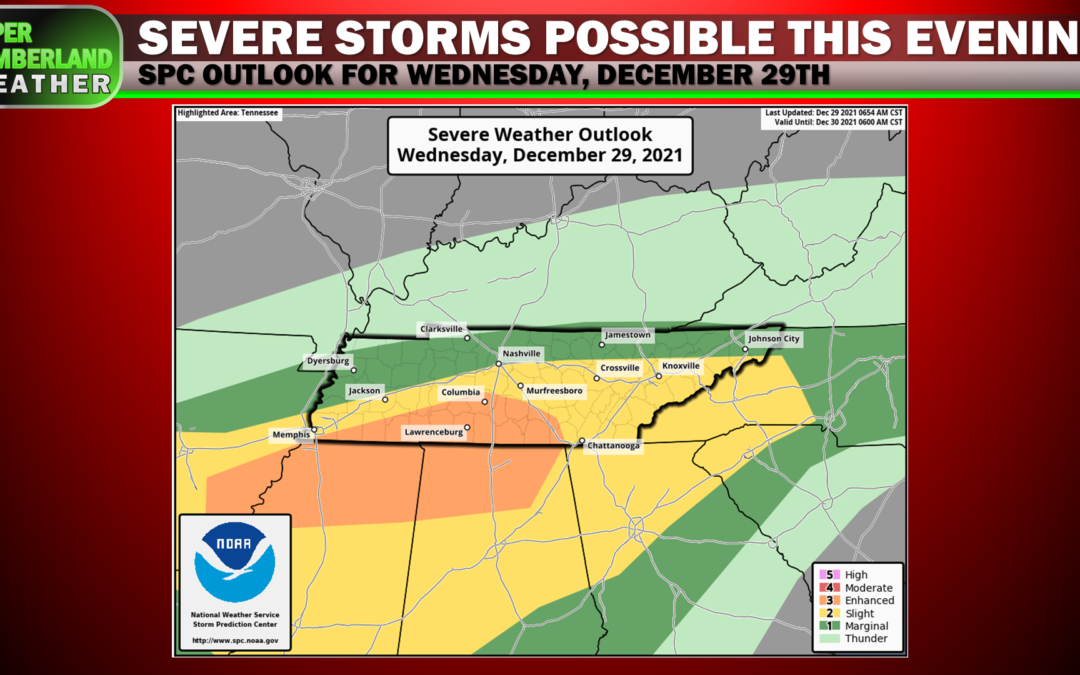 We’re continuing to watch for the possibility of a strong to severe storm or two this evening, although the greater threat of severe weather will be to the southwest of the Upper Cumberland.

We’ve seen a few showers around this morning. That activity should mostly come to and end by lunchtime with only a couple stray showers around into the early afternoon hours.

Highs this afternoon will again be mild in the upper 60s to near 70° in most spots.

Later today, a surface low will move along a surface boundary parked just to our north over southern Kentucky. Instability will increase quite a bit south of our region over the Tennessee Valley, but it may have a hard time reaching as far north as the Upper Cumberland, which will limit our severe storm threat, especially the farther north you are.

Widespread showers and thunderstorms will begin to push in around sunset, hanging around for a few hours before moving out of our area by late this evening, well before midnight (a welcome change to the forecast, as this no longer looks to be a nighttime event for us).

Our best shot at seeing any severe weather will be from sunset until 10 p.m. tonight, ending completely at that point. Those south of I-40 will be closer to the instability needed for severe storms to fire, so your severe weather probability is increased a bit.

Likewise, those north of I-40 will likely be in a more stable environment, thus your severe weather probabilities are decreased (but not zero) compared to the south.

Overall, this is looking to be more of a low-end severe threat for us and nothing like what we saw a couple weeks ago. Damaging wind gusts will be the primary concern, but an isolated tornado can’t be ruled out. We could also see pocket or two of hail.

Again, these threats decrease the farther north you are toward Kentucky where the atmosphere will be more stable.

We’ll also have to watch out for localized flooding issues to potentially develop, as 1-2 inches of rain is forecast through tonight, much of which will come during a short period this evening.

Further updates will be posted throughout the day. As always, we’ll provide live streaming coverage should any warnings be issued for our 12-county coverage area.

We’re still looking at yet another threat of severe weather late New Year’s Eve through the afternoon hours New Year’s Day. More details on that to come, but at this time, that event looks to be more potent compared to today as far as potential severe weather is concerned.